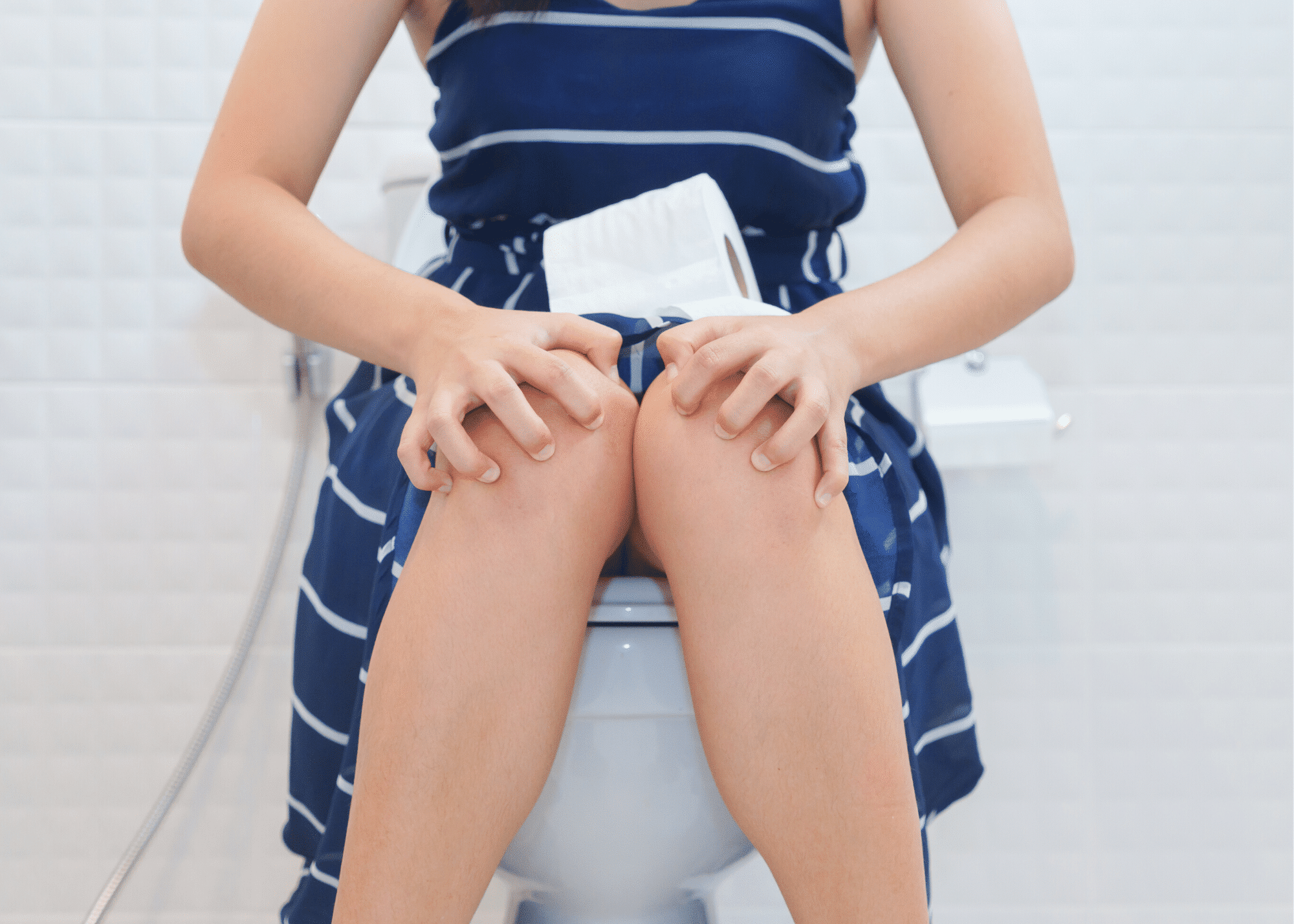 Have you ever been ‘stuck’, ‘clogged up’ or ‘full of bricks’? Over the centuries, constipation has gone by many delicate euphemisms, but as one of the most prevalent gastrointestinal problems, it refuses to budge. Today on the blog we are flushing away the taboo to talk about chronic constipation – the physiology behind it, foods/diets that can cause constipation and what you can do to combat it.

What is chronic constipation?

Constipation is an umbrella term used to describe a range of symptoms – including hard stools, excessive straining, irregular bowel movements, incomplete evacuation, bloating and abdominal pain. In some cases, constipation is also caused by more serious illnesses and events. It can be classed as acute (short term), typically lasting less than a week, or chronic (long term), usually lasting more than four weeks.1

Constipation is one of the key symptoms often associated with Irritable Bowel Syndrome (IBS). People with IBS typically have abdominal discomfort or pain associated with their bowel movements. IBS with constipation as the predominant symptom is sometimes referred to as IBS-C.

What happens in my body when I’m constipated?

The causes of constipation can be varied and classed as either primary or secondary. Primary causes refer to intrinsic problems of colonic or anorectal function. In other words, there is a breakdown in one of your ‘plumbing pipes’ that usually allows defecation to take place. Secondary causes refer to an underlying disease or medications that can cause constipation.

A key term to understand when explaining the causes of primary constipation is ‘transit time’ – which refers to the duration between when we eat a meal and when the leftover waste passes out as stool. Let’s use a sandwich for example. When you swallow a mouthful of your sandwich, it ‘boards the train’ of your gastrointestinal system. The important nutrients are extracted in the small intestine and then it is the job of the large intestine to store, process and get rid of waste, while absorbing some nutrients and water. Once the bowel has done its work and absorbed water and any remaining important nutrients from the sandwich, the waste travels to the rectum which stretches, triggering a message to the brain to say that the bowel is full and needs to be emptied. The remnants of the sandwich ‘arrive at the destination’ when the waste has been expelled through the anus as stool. A full meal can take anywhere from 12-72 hours to pass through the digestive tract.

Usually, before food (such as our sandwich), enters our large intestine, most of the nutrients have been absorbed into the body and the colon simply has to remove the water. However, if someone is experiencing a long transit time (the food is moving slowly through the colon), too much water is absorbed, hardening the stool and making it difficult to pass. Think of this as the sandwich having to wait on the train for too long due to an engine breakdown – it will slowly start to become agitated and ‘harden up’.

The increased length of time during which stool remains in the colon causes increased pressure on the bowel, which leads to characteristic symptoms of constipation such as abdominal cramping, bloating and fullness.

How do FODMAPs impact constipation?

In the small and large intestine, FODMAP molecules have an osmotic effect, meaning they draw more fluid into the bowel. These molecules are also rapidly fermented by colonic microflora, producing gas. Both the increase in fluid and gas production distends the bowel, which may cause the sensation of bloating and abdominal pain, affecting how the muscles in the wall of the bowel contract. This increased fermentation can affect transit time, meaning a faster or slower movement of food through the gut. Fast movement may result in diarrhoea, whereas slow movement can cause constipation.

What are the foods or diets that can cause constipation?

The word ‘fibre’ is closely related with constipation, as a low fibre diet can be a dietary cause of constipation. Fibre can be broken up into three types – soluble, insoluble and resistant starch.

Soluble fibre describes the viscous fibre that can dissolve in water to form gels. It is found in plant cells and is fermented by bacteria in the larger intestine to produce short-chain fatty acids and gases. Soluble fibre can be found in foods such as beans, oats, fruits and vegetables.

Insoluble fibre absorbs water and swells up, giving bulk to stool. It makes up the structural parts of plant cell walls, which is why we find insoluble fibre in the skins of fruits and vegetables as well as in nuts, seeds and wholegrains. It is dietary ‘roughage’, so not digested, but makes stool much easier to pass. Think of insoluble fibre like putting Weetbix in a bowl of milk – the Weetbix absorbs the milk and swells up.

Resistant starch is not typically thought of as a fibre, but it is part of starchy food that resists normal digestion in the small intestine. It is found in many unprocessed cereals and grains, unripe bananas, potatoes and lentils. Like soluble fibre, bacteria in the large intestine ferment the resistant starch to short chain fatty acids.

We need these different types of fibre to ‘keep things moving’ in the bowel department and prevent constipation. This is why a low fibre diet can cause constipation. However, it is important to note that constipation has a ‘Goldilocks’ relationship with fibre. Eating too much fibre also promotes fermentation and gas formation, which makes bowel movements too big and bulky and they can be equally hard to pass or give you diarrhoea. This is why it is important to get our fibre intake at ‘just the right’ amount of 25-30g/day.

What are some non-food influences that can affect constipation?

Constipation is not just caused by a lack of fibre. In fact, there can be many lifestyle factors that influence a change in bowel habits, including:

Change in routine: normal bowel motions depend on the regular/rhythmic bowel contraction. This part of the body’s internal clock is often upset with routine changes, which is why we may get constipated when travelling.

Lack of regular exercise – aerobic exercise speeds up your breathing and heart rate which helps stimulate the natural squeezing of muscles in your intestines, helping stools move more quickly.

A tendency to put off going to the toilet – ignoring the urge to defecate increases the transit time, hardening stool sand making them harder to pass.

Medications narcotics, antidepressants, iron supplements and anti-hypertensives can cause constipation as a side-effect.

Illness – secondary chronic constipation can be the result of an underlying illness.

What can I do to combat constipation?

The first line of attack usually recommended is to increase fibre intake. The Australian adult is recommended to consume 25g/day for females and 30g/day for males. What does this look like across the day? Eating two hi-bran Weetbix, four slices of bread, two pieces of fruit, one tablespoon of peanut butter and 1 cup of frozen mixed vegetables would get you there. A rule of thumb is that fibre is found in plant foods, so the more plants you eat, the better. As you increase your fibre intake, make sure your water intake increases too.

Gentle physical activity is also recommended as it has a positive effect on overall gastrointestinal symptoms and improves bowel motility.

If increasing fibre and physical activity doesn’t help, you may respond favourably to the low FODMAP diet which temporarily restricts intake of poorly absorbed fermentable carbohydrates causing gastrointestinal distress. However, the low FODMAP diet is not a diet you should embark on alone, as it involves restricting FODMAP containing foods which can be found in fruits and vegetables which are rich in essential vitamins and minerals. It is important to work with a dietitian who will ensure you can meet your nutritional needs whilst also managing your constipation.

The next line of treatment is often prescribed laxatives. Laxatives work in different ways, but the most common type are osmotic laxatives which create an osmotic gradient that draws water into the small intestine. When used appropriately, laxatives can relieve acute constipation. However, chronic use could lead to developing a ‘lazy bowel’, meaning dependence on laxatives to have bowel movement at all. Also, they don’t tend to address the root cause of digestive problems and can often be a ‘band-aid fix’. It is important to consult a doctor before using laxatives to ensure you are using them safely or if there is a more suitable management strategy for your constipation.

Above all, seeing a doctor and dietitian for chronic constipation is our key recommendation. Constipation could be a result of more sinister conditions such as bowel obstructions or bowel cancer, and a doctor/dietitian will help you address the root cause of the problem.

Primary chronic constipation is typically caused by a breakdown in colonic or anorectal function, leading to a delayed transit time, causing too much water to be absorbed. This can make stools difficult to pass. Adequate fibre intake is important in preventing constipation, as well as regular exercise and water intake. The low FODMAP diet could also be an option to pursue under the guidance of a dietitian. Laxatives may provide short-term relief but will not address the long-term causes.