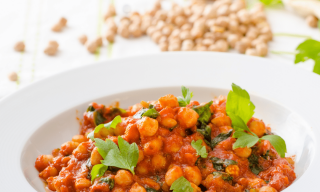 A good tagine is a great addition to any weeknight dinner rotation. With vibrant capsicum and crunchy chickpeas, our FODMAP Friendly roasted red capsicum & chickpea tagine is likely to be popular in any low FODMAP household. With the goodness of Leggo’s FODMAP Friendly certified Classic Tomato Pasta Sauce, you’re going to love this recipe!

A tagine is essentially a Moroccan stew. Here at FODMAP Friendly, we love that you can throw a number of different vegetables into a tagine and get a very nutritious meal! Common high FODMAP ingredients in a tagine include onion & garlic. Unlike traditional pasta sauces on the market, the Leggo’s Classic Tomato Pasta Sauce does not contain onion or garlic. Available from Woolworths, it is a perfect addition to our tagine. We have also utilised a range of low FODMAP vegetables – including potato, eggplant, zucchini and capsicum.

You’ll notice that chickpeas feature in our tagine. Canned chickpeas are low FODMAP in ¼ cup serves as enough of the galacto-oligosaccharides leach out of the chickpeas and into the brine. Just ensure you wash and rinse the chickpeas well before using in your tagine to reduce the GOS content as much as possible. We’ve also channelled the ‘hint of sweetness’ typically found in a tagine through honey by using maple syrup, a sweetener considered low FODMAP in two tablespoon serves.

1 potato, peeled and cut into chunks

Handful of coriander, to garnish

1. Preheat the oven to 180° Mix the potato, eggplant, zucchini and red capsicum in a large bowl. Drizzle over 2 tablespoons of the oil and mix to coat. Season generously with salt and pepper.

2. Heat a large fry pan over a high heat. When the pan is hot, add the vegetables in batches and stir fry, stirring and turning regularly, for 3-4 minutes, or until lightly browned.

3. Heat the remaining oil in a lidded casserole over a medium heat. Add the spices and heat for 1-2 minutes, stirring frequently.

4. Stir in the Leggo’s Classic Tomato Pasta Sauce and maple syrup until well combined. Add the vegetables and cook for 2-3 minutes.

5. Cover and transfer to the oven. Cook for 30 minutes, then stir in chickpeas and 200ml cold water until well combined.  Return to the oven, covered, for a further 15 minutes, or until the tagine is thick and the vegetables are tender.

6. While the tagine is cooking, cook the quinoa. Place the dry quinoa in a mixing bowl and cover with cool water. Swish it around then pour it through a fine-meshed strainer and rinse further under cool running water. Pour the quinoa into a small saucepan, add 2 cups clean water and salt and give it all a quick stir. Cover and bring to a boil over medium-high heat. Turn heat down to very low and allow to cook for about 15 to 20 minutes or until the liquid is absorbed. Turn off heat and allow to sit, covered, for 5 minutes.

7. Sprinkle the tagine with the chopped coriander and serve with the freshly cooked quinoa.